Anticipating Dissent: The Repression of Politicians in Pinochet's Chile. Forthcoming, Journal of Politics

Working Papers
Covert Confiscation: How Regimes Differ in Their Strategies of  Expropriation (with Rebecca Perlman) (Under review)

Do Misperceptions Matter? (with Jonathan Mummolo and Sean Westwood) (Under review)
​
The Audience of Repression: Killings and Disappearances in Pinochet's Chile

Identity Under Occupation: Evidence from 19th Century Spain (with Mathilde Emeriau)
​Book Project
When former Chilean dictator Augusto Pinochet died, mourners flooded the streets. At the time, Pinochet was awaiting trial for his role in the deaths of 3,000 people and the torture of 30,000 more. While literature on repression focuses on its role in suppressing political opposition, many dictators - like Pinochet - rely on the support of segments of the population to maintain power. How does the need to maintain a backing coalition impact the practice of repression? My book project demonstrates that repression serves not just to eliminate opposition, but to appeal to supporters. Violence and censorship can be used to demonstrate the efficacy of authoritarian governance - and the inadequacy of democratic rule of law - in managing perceived social and political threats to dictators' backing coalitions. However, this relies on supporters viewing repression as a proportionate response. Original data on political killings, detention, exile, search and seizure, and pop culture censorship in Chile provide evidence that the anticipated responses of supporters significantly shaped patterns of repression.
​
Other Publications
All The President's Trolls: Real and Fake Twitter Fights in El Salvador. 2020. International Crisis Group.

In Transition to Civilian Rule, Myanmar Can Learn from Chile. 2013. World Politics Review 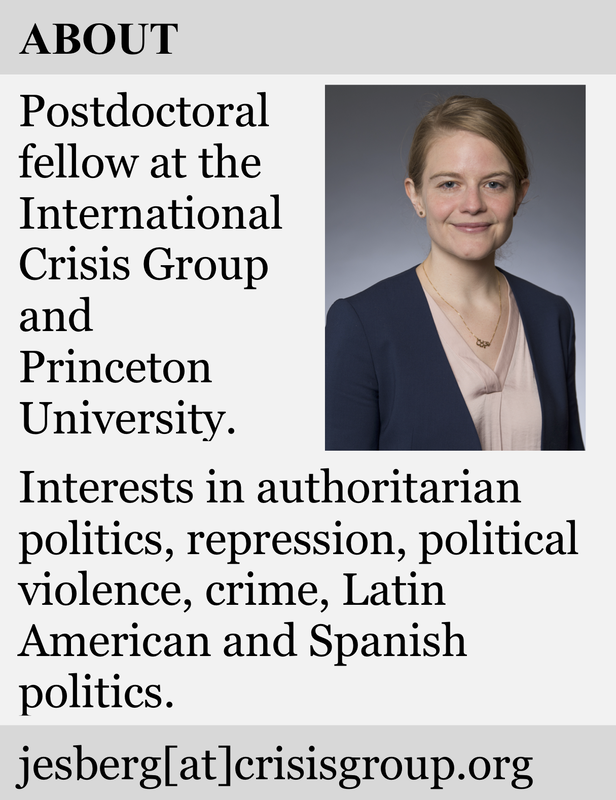